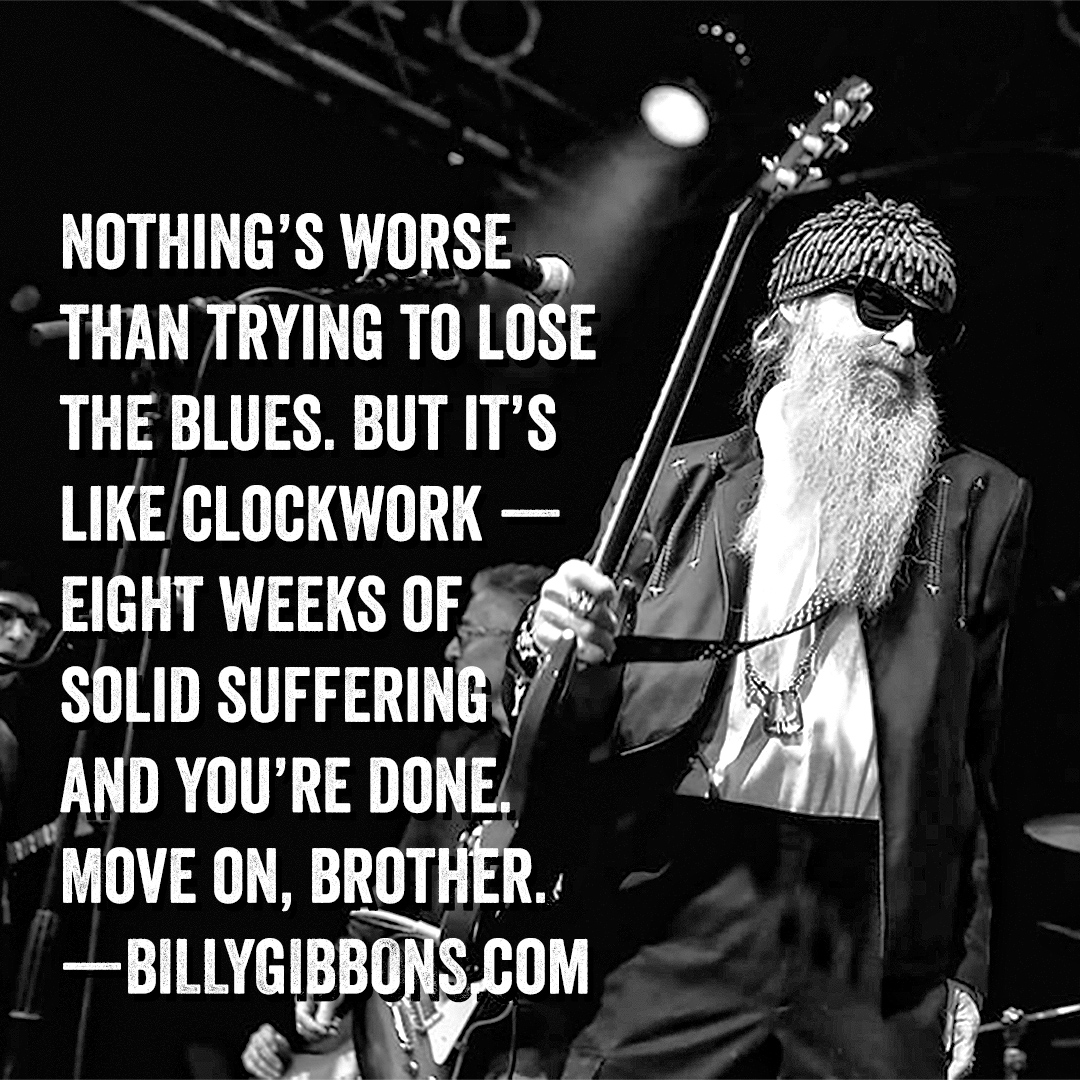 What adventure most changed your life?

Finding that button on an electric guitar that turned it up to full power. That was on Christmas Day, 1962. I had just turned 13, and sitting under the tree was a little Gibson Melody Maker and a nice little Fender Tweed amplifier. And away we went.

What should every man know about money?

The adage holds true: The more you have, the more convenience you can buy. But money is only that: a convenience.

My dad was quite the entertainer. He was a classically trained pianist who grew up playing with his five brothers as the Gibbons Brothers Band. The thing he shared with me that still resonates: Play what you want to hear. And following that, the two golden rules: Play it in tune and play it in good time.

What should every man know about clothes?

Know your motorcycle well. And if you don’t have respect for it, then park it in a corner and use it as a piece of art.

What should every man know about women?

That we may be of the same species, but our wiring is totally different. And if you can enjoy the novelty of the differences, you’re leagues ahead of anybody who can’t.

What’s the best way to impress a woman?

A Rolls-Royce doesn’t hurt. Beyond that, be genuine. We are all compelled by honesty.

What’s the best cure for heartache?

Nothing’s worse than trying to lose the blues. But it’s like clockwork — eight weeks of solid suffering and you’re done. Move on, brother.

What’s the best cure for a hangover?

Start with five dashes of my BFG pepper sauce, followed by three ounces of tomato juice, one raw egg, one cube of ice, a shake of black pepper, and a big, tall straw.

Do you have a scar that tells a story?

My left index finger, right at the middle knuckle, needed 14 stitches from a mishap attempting to open a fifth of Jack Daniel’s with a knife.

Who’s the toughest guy you know?

I was standing around a movie set with Billy Bob Thornton, J.P. Shellnut, and Robert Duvall, and we were contemplating who could take our collective toughest challenges and knock ’em out in one lick, and, hands down, it was Dwight Yoakam. He traveled a tough road to get his talents out.

What tool should every man own?

With a fully charged iPhone at your disposal, you can survive just about anything. Also, a man might do well with a good handsaw.

It may sound insignificant, but as a guitar player, when you get in arid climates and fissures appear on your fingertips, it can be quite painful. When that happens, it’s Super Glue to the rescue.

What music should every man experience?

Anything by Jimmy Reed, the great blues man. He’ll set you free.

What advice would you give the younger you?

Embrace everything in moderation. You don’t come to know its importance until much, much later.

How should a man handle getting older?

Grow a beard and make friends with a good hat. It will be a companion that doesn’t let you down.

What’s the most scared you’ve ever been?

A buddy of mine at NASA was in charge of astronaut weightlessness training. Their training plane, the Vomit Comet, was in Los Angeles, and he invited me to see it. I was with Penn Jillette at the time, and he said, “Yeah, I’ll go with you. Let’s check it out.” We were escorted aboard, and then the door closed. Jillette looked at me, and I looked at him, and he said, “It looks like we’ve been tricked.” There was one tiny window halfway down the fuselage, and when I looked out, we were climbing to 55,000 feet over the Pacific. That’s when the fun began. We have been gravity-ridden, earthbound creatures since time began, so that first drop, when we floated off the floor, was hair-raising.