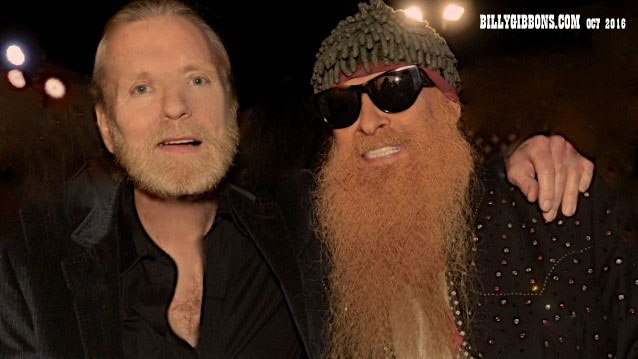 Just when it comes down to looking across the racks and stacks of six string things, the question returns… Is it Fender or Gibson…

As BFG and Gregg Allman took the stage for the recent throwdown of a hair-raising rendition of one of the the all time blues favorites, Sonny Boy Williamson’s good old Southern standby “One Way Out”, the house started rockin’ as the sounds of a searing sizzle guitars picked up the pace, jangling out and handful of those familiar riffs that one seemingly can never get enough of. It could surely be said the stage was suddenly rumbling like a house a-fire. And there, before the gathered throng of twenty-something thousand came the triple gang-grind with two great guitar marques between the now-famous solid-body Spanish electric guitars, both Fender and Gibson.

Gibbons, slung low with his highly modified ’61 Les Paul, centered between Gregg and his custom fitted Strat and Scott Sharrard rippin’ up on his modernized version of the Gibson 335-esque, a Custom Shop ES-336 converged with a collision hittin’ right between the eyes with a sweet soulful sound of the six string from both ends of the spectrum. So what’s to make of these polar opposite slabs of wood and wire?

Once the smoke cleared from the night’s performance at Atlanta’s Lakewood Pavillion, we slid through the backstage passages with Gregg, BFG, Scott, along with the chance encounter with Charlie Starr and Brit Turner, the two founding members of Georgia’s great guitar driven outfit, Blackberry Smoke. All fellow stablemates of contemporary rock, blues, and country. It was a moment hanging heavy with a hallway full of ancient and semi-ancient instruments, Gibson in one hand, Fender in the other.

As long as time has stood with the two globally renowned trademark brands brandishing the banner of “World’s Best”, we dig deep into the differing elements of what distinguishes the parts and pieces of a player’s puzzle.

First, there’s the dark and brooding richness of Gibson’s strident sound next to Fender’s slick and stinging appeal, both wildly apart from meeting in the middle. Some observers may start by pointing out the two, varying scale lengths lend varieties of both tension and tonality. Fender’s slightly longer traditional scale of 25.5 inches compared with Gibson’s standard 24.75 inches easily separate the two. Fender’s longer scale length, possessing a tighter bit of tension, adds much to the recognizable brightness inherent in most models. Gibson, on the other hand, maintains a sightly looser string taughtness, which gives the various examples a perceived fatness by allowing the strings to remain smooth and supple. And, of course, there are those that also may lay claim to specific specialties in electronics. Without a doubt, both brands are regarded by most as two winning combinations.

So, in the final analysis, keep the far reaching extremes of both Fender and Gibson close by to finesse a sound aimed at serving up a statement and perception with the elegance of style possessed by the differences of both brands.

After all, as most guitar players agree, it’s still all about that thing called the six string.