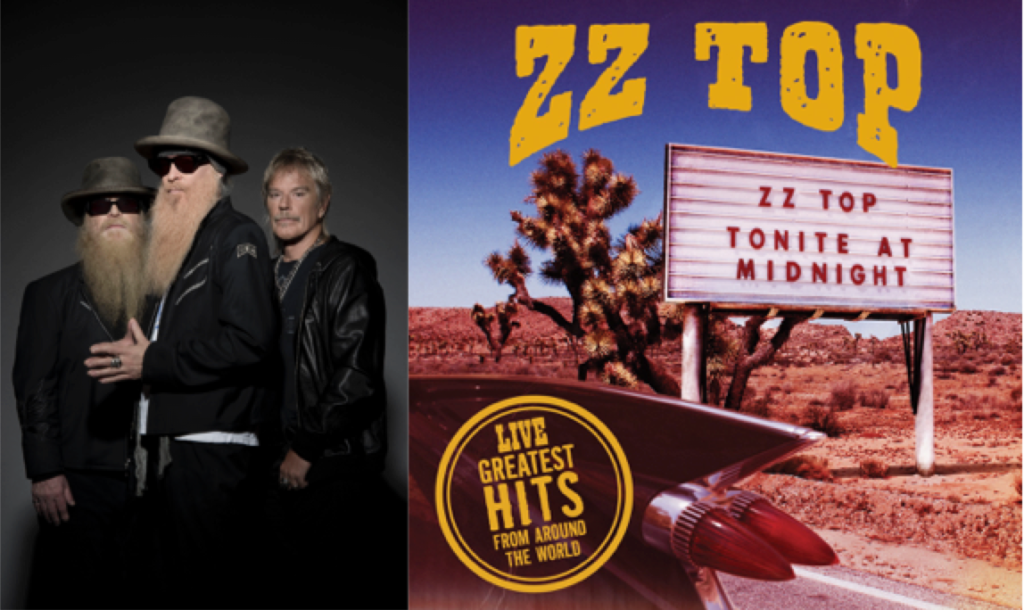 After nearly 47 years as a band, after 15 studio albums that sold a collective 20 million copies and a half-dozen compilation discs that sold 6 million more, and after 34 singles that hit Top 40 on various charts, ZZ Top released the first full-length live album.

“ZZ Top Live – Hits From Around The World” is exactly what its title says: a double-album of 15 of the band’s best-known repertoire recorded on several tours inNorth America, South America and Europe.

ZZ Top continues playing a rambunctiously lively live show, complete with a hit-laden set of songs such as “Gimme All Your Lovin’,” “Sharp Dressed Man,” “Legs,” “Tush”and “La Grange”. That’s what they like bringing to their stages around the planet these days.

VALLEY MUSIC:  I read a recent interview in which you said ZZ Top has “a lot” of material for a new disc. Any idea when it might come out? What’s the material sound like?

BILLY GIBBONS: “We do indeed and it sounds a lot like ZZ Top!  There’s quite a few songs rattling around from the never-ending studio sessions and we continue to work things out. As the ZZ song says, “Country, Jesus, Hillbilly, and Blues.”  We reach out for it all.”

You guys most recent release was back in 2012’ “La Futura.” Why now something new?

“ The ironic twist to that question is ZZ Top’s first-ever, all live, full-length album…  It’s “ZZ Top Live – Hits From Around The World“, literally recorded around the planet and officially now out on the street.

“And there’s a couple of splendid players, James Harman, who played on the group’s 2003 disc “Mescalero” as well as on “La Futura”, blowin’ some mean blues harp with us on‘Waitin’ For Th’ Bus’ and ‘Jesus Just Left Chicago,’ as well as the fierce guitar slinging from our good friend, Jeff Beck adding his signature to the ballad-like fave, ‘Rough Boy’ and some greasy guitar searing through the country and western classic, ‘16 Tons’.  We think it’s super.  Everybody gotta like that!”

[In a publicity release, Gibbons says of the album, “In an abstract surrealism style, this collection is a definitive chronicle of the band hangin’ together for four-plus deluxe decades, getting down to do what we get to do. The true document of life de la ZZ.”

[The disc isn’t ZZ Top’s first foray into recording its live shows. It has released three DVDs, including the double-platinum “Live from Texas” in 2008. It most recently released “Live at Montreux 2013” in 2014.

[The self-proclaimed “Lil’ Ol’ Band from Texas,” which also includes bassist Dusty Hill and drummer Frank Beard, first made its mark as a boogie-rock outfit that released its first disc, “ZZ Top’s First Album,” in 1971, but didn’t see real success until 1973’s “Tres Hombres” and 1975’s “Fandango!,” both of which went Top 10 and sold gold with the hits “La Grange” on the former and “Tush” on the latter.

[The band enjoyed big success in the 1980s, when “Legs,” “Gimme All Your Lovin’” and “Sharp Dressed Man” dominated MTV with videos of the sunglass-wearing, long-bearded guitar players.  The success of those songs helped the band’s 1983 album “Eliminator” sell more than 10 million   copies, and the 1985 follow-up “Afterburner” sell 5 million copies.

[The group had a hit since 1996, when “What’s Up with That” hit No. 5 on the Mainstream Rock chart and the popularity continued: “La Futura” hit No. 6, the group’s highest-charting disc in almost three decades.

[ZZ Top was inducted into the Rock and Roll Hall of Fame in 2004.

[The live disc isn’t the only first step ZZ Top has taken recently.

[Gibbons last year released his debut solo album (and first solo disc by a ZZ Top member), “Perfectamundo,” and took to the road in his first-ever solo tour across the USA and then down to appear at the Havana Jazz festival in Cuba!

[Gibbons assembled the songs in his studios in both Houston, Texas and Hollywood, California, exploring the potential for a Latin flavored album with his Argentine-born, Puerto Rico-raised friend, “GG” Martine, and musical collaborators, B3 specialist from Austin, Texas, Mike Flanigin, and the two loveliest female drummers one could hope to see pounding a backbeat, SoZo Diamond and Melanie DiLorenzo who flanked the band’s resident DJ, Alex G.

What stimulated creating the solo disc “Perfectamundo” at this point? How does it shape up and compare it with ZZ Tops’ albums?

“The catalyst was the over-the-transom invitation to perform at the Havana Jazz Festival which immediately aimed the challenge toward an approach with some solid sounds appropriate for the gathering there.

“Some serious woodshedding and recollecting what Tito Puente taught us way back when about Latino rhythm and percussion followed.  With ZZ, the guitar is out front and the rhythm lays way back; ‘Pefectamundo’ on the other hand puts rhythm out front leaning heavily on that Cubano backback — it’s all about moving posteriors, and when in Havana, THAT works!”

We caught you on the solo tour which was a really good all-around show – and loads of fun. What did you think of it? What was it like to take on the challenges of a solo outing?

“Twas a gas being the ‘baby band’ again.  Flashbacks from our earlier days on the road abounded and we certainly got to cranking it up, getting up close and personal.  Thanks for the shout and coming out! “

ZZ Top has now been at this for over four decades since the band was founded.  What are your thoughts about that? Any plays for a 50th anniversary tour?

“As the saying goes, ‘one day at a time.’  With us, it’s more like a fast minute-at-a-time yet we’re totally dedicated to keep on keeping on all the while.  Someone will have to remind us when the big Five-oh is coming up. We’ll buy the cake.”

We hear rumors of an unusual TV appearance with ZZ collaborating with another, call it an “artist”.  True?

“Well, some things, for the moment at hand anyway, might best remain as one of  those mysteriously and magnetic tantalizing rumors or rumblings.  However, Like Muddy Waters once said, ‘We gonna do this thing!’ ”