ZZ Top will celebrate their 50th anniversary as a band in 2019, and thus far the two beards and a Beard have kept mum on any special birthday plans. It’s a little far out yet, but here’s an idea: make a country record. Shoot, from their RodeoHouston set lists alone, there’s Hank Snow’s “I’m Movin’ On” and Johnny Cash’s “Get Rhythm” from 2009, and then Johnny Paycheck’s “11 Months and 29 Days” and Jimmie Rodgers’s “In the Jailhouse Now” three years later.

From Tuesday night, before an announced crowd of 59,142 that sounded bigger than it was — plus Texas Governor Greg Abbott on hand to bestow a special license plate on the band, presumably for one of those Eliminator hot rods — we can now add Buck Owens’s “Act Naturally,” Tennessee Ernie Ford’s “16 Tons” and the Man In Black’s “Folsom Prison Blues,” sung by bassist Dusty Hill in a stout baritone 180 degrees removed from the glass-shattering tones he reaches on “Tush.”

Already that’s a hell of an album, and Lord only knows what else Billy and Dusty (and Elwood) might pull out of those battered old hats at sound check. We do know that ZZ’s guitar tech, an overall-clad gentleman named Elwood Francis, is a whiz on the lap steel. The way he navigated his fingerboard on “Act Naturally” Tuesday would have tied lesser musicians’ fingers in knots, but went down as smooth as a shot of Gibbons’s Pura Vida tequila.

Even still, and perhaps you knew this was coming, but the real way ZZ Top act naturally is when Billy Gibbons loads one of those riffs like “Waitin’ For the Bus” into the chamber, smears it with hot sauce, sweat and axle grease, and only then drops the hammer. For a band that loves cars as much as they do, their songs start to take on that form after a while. The chassis comes from Hill’s beefy bass parts, Gibbons’s guitar adds the detailing, one raunchy chord or cascade of notes at a time, while Beard’s drumming handles the maneuvering. No doubt that’s by design. Nearly a half-century on, they’re on cruise control, not autopilot. 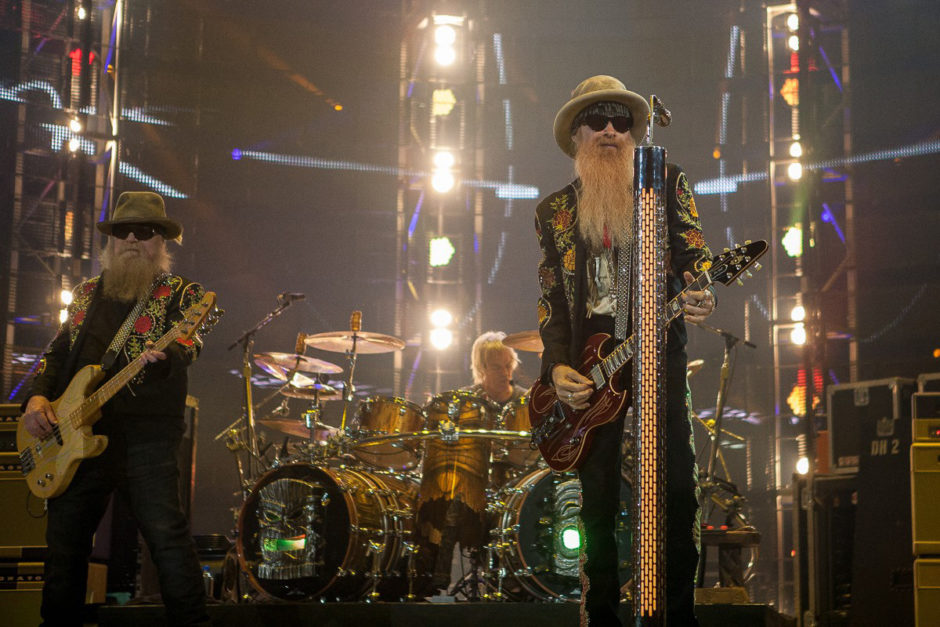 They were obviously having fun, changing “Mississippi” to “Houston, Texas” several times during “My Head’s In Mississippi” and playing a stitch slower than on the records, like they were making a point to savor the occasion. A few times Gibbons and Hill broke into a little Three Amigos choreography to match their outfits. Gibbons often sings like he’s sharing a private joke, or cluing the audience in to a clandestine bit of musician lore. Tuesday, he asked if everybody was having a good time after nearly every song, in that way you ask a question you already know the answer to; the stadium popped a little louder each time. Once he even let out a Ric Flair-esque “Whoo!” Home cooking always tastes the sweetest.