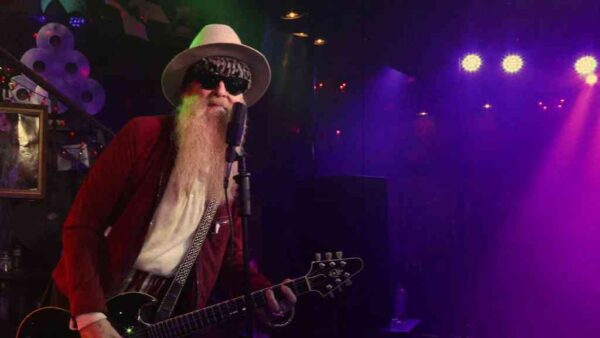 WATCH THE VIDEO AT: https://relix.com/blogs/detail/video-premiere-billy-f-gibbons-hollywood-151/

Billy F Gibbons continues to release blazing material outside the immediate world of ZZ Top. In our review of The Big Bad Blues, his most recent album, we noted, “Gibbons hasn’t lost any of his fire, that’s for sure, and those original tunes are every bit as solid as the covers.” Gibbons has just released a new video for “Hollywood 151” from the new record, which we are premiering today.

Gibbons tells Relix, “Years ago we were intrigued and enthralled by a duo of Mexican guitarists who performed in Hollywood, calling themselves ‘Bacardi 151’. It was just these two guys who played matching Fender Jazzmasters and they used a rudimentary drum machine/beatbox, a basic Rhythm King, to complete the elemental sonic picture.

“They were aficionados of super high proof rum, Bacardi 151, which is an astonishing 75.5% alcohol; “’normal’ rum running around 35%. It packed such a wallop that it was literally explosive so about five years ago Bacardi got out of the business of making it for fear of product liability lawsuits; the stuff was dangerously combustible!

“The guys who took their name from this mega-booze also consumed it as did a fair portion of their audience. As their performance wore on into the night they seemed to become better and better but maybe they were playing worse and worse. It’s all a matter of perception when you get right down to it.

“We’ve always held the number ‘151′ in high regard — make that cautious high regard — so it was a natural topic for a song on our album “The Big Bad Blues.”

“The video is just a cruise around town in a ’54 Chevy and rocking out at the Bourbon Club on — yes! — Hollywood Boulevard. Rest assured that the driving around came before a secret stash of the song’s namesake was located and uncorked during the performance sequences. Glad they made a video of that since we have no real recollection of what went down but it looks pretty good to these (bloodshot) eyes.”

For a bit more on Gibbons’ solo work, including his early friendship with Jimi Hendrix, check out this interview.

WATCH THE VIDEO AT: https://relix.com/blogs/detail/video-premiere-billy-f-gibbons-hollywood-151/